If you've followed my blog in the past then no doubt you'll recognize these "WIP Shots" that I've posted from my latest finished illustration, "Breto's Hammer." I try to make a habit out of creating these sort of timelines when I work because I find it fun to look back on and I figure someone might find something helpful in looking at them. This one in particular skips a lot of steps but I thought I might try to walk you through the process quickly anyway.

You'll notice that the process is pretty similar to how I work on other things as well. I really had to find my way with this one because I wasn't completely confident in where I was going. All I knew is that I liked the charm of the initial sketch and wanted to paint it up. The rest I just sort of made up as I went!

1. This is just the first initial sketch from my sketchbook. I really liked the pose and sense of character that you get from the guy. Never mind the anatomy issues! Ha!

2. After scanning the sketch in I started blocking out some environment ideas as well as laying in some value to get some things cemented in there. Even at this point, when I'm still trying to figure out what I'm drawing/painting, I'm making note of where my light is coming from to some degree. Trying to get a bit of mood in the piece early as well as bringing a bit of dimensionality to the image. I also tend to think about the foreground, middle ground and background during this time by limiting certain values for different areas. As you can see I'm reserving darker values for the foreground, for instance.

3. At this point I'm getting a bit hasty and just want to start seeing some of the color relationships that I have in my head in the actual image. So I lay down a bunch of local color. I really wanted to play up the relationship between blue, orange and pink. Sometimes just getting some colors in is enough to get me really excited about where a piece is going. You'll also see that I've started to continue to render things out here and there, developing the forms.

4. Continued rendering, cleaning up elements, playing with shapes. I liked the idea of creating a sort of circle frame around Breto that would keep the viewer revolving around the image compositionally. I liked the idea of these big bold, dark shapes guiding your eyes towards the dwarf. I'm also trying to knock out some of the white in favor of color, reserving the white later for more dramatic areas that I want to draw the eye towards.

5. There's a pretty big leap here and a lot of different changes that too place. I started addressing some of the initial anatomy issues as well as reshaping some of the different shapes I was playing with. I also dramatically punched the lighting to try and give it more of an impact. It was at this point that I really felt I knew where the image could be headed. As you can see I stretched the image out a bit so I wouldn't feel so contained and I really felt it help the composition breathe more. I'm continuing to render, keeping in my the way the light is affecting the form and the color relationships as well. I try to really play on the warm/cool relationships in my work. I'm also trying to find my way around the background in the hopes that I'll give the environment a bit more depth.

6. Towards the finish the polish just keeps coming and I keep adjusting and rebalancing values, colors, etc. The more I'd polish and render I'd find that I wasn't doing the overall image any favors. So I started blurring out parts of it to really push some stuff back and get the viewer to focus on Breto more. I darkened the "circle frame" I'd created in the environment to really help push that forward more as well. You'll notice some texture detail added as well to help sell the environment. The bits of snow blowing around was something I liked but I'm not sure how well it worked.

And that's the basics of my image! To be honest I kinda phoned in the background a bit and I think I could of added more environmental stuff to really help sell it more. I drug this image out for way too long though. I only worked on it for a few nights but I took month long breaks in between touching it! Ha! If you have any questions feel free to drop me a line. It's a messy process but I love the discoveries it often brings. And each time I paint something it becomes slightly more refined.

I hope some of this was helpful! Stay tuned for a sketchbook update soon and thanks for looking! 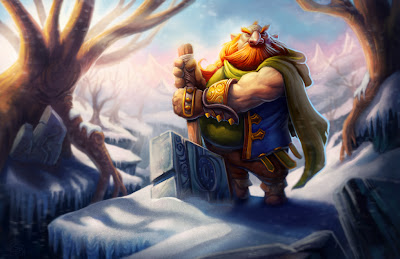 It seems I've taken the last couple months off from posting on my blog! I'm really sorry about that! As Spring turns into Summer I'm always struggling to find time for art in between all the visitors and outdoor stuff that goes on with all the great weather. Rest assured I'm hoping to find myself posting more regularly again soon. So thanks for your patience.

I do bring new art for you though! Well, finished art at least! My work is sponsoring an art show so I needed to scramble to get a piece together for it. This guy was far enough along that I didn't have to push to hard to just get him up over the edge to finish. There are still things that I would have liked to push and work on more but I think this gets the job done. I really wanted the dwarf to be the focal point and I think working on the rest so much might have detracted a bit from him.

After working on this off and on I'm just ready to move on to the next thing. I'm interested to see how people like him. Perhaps I'll do a print series of the fella if people are interested. If you'd like to see the HiRes version just click here!

Thanks again for stopping by! Remember you can always follow me on Twitter (@ryanbowlin) if you want to see what other things I've been up to! :: cough :: Animal Crossing :: cough ::

Ryan
Posted by Ryan Bowlin at 12:09 PM No comments: